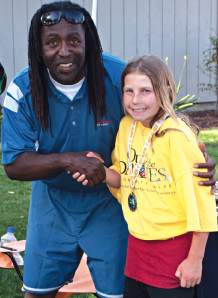 Greatness in this sport is measured in large part by titles and triumphs. Yet another kind of tennis hero, one whose legacy will be cemented in ways we may have yet to fully understand, has left us far too soon. There are no trophies that can measure the greatness of this man whose contributions were immeasurable.

Manning had all of the attributes we admire in our tennis icons--stamina, determination, perseverance, work ethic, and a focus to elevate his "game" to the next level. And boy, did he have game. Not so much in the form of the on-court variety, although his coaching skills are legendary and he was, in his own right, a standout high school player and USTA leagues and tournaments competitor. His true gift was having the unique ability to turn an industry on its ear by making it stand up and take notice of the dazzling brilliance that dared to emerge from his beloved community of East Oakland--a spot on the map often characterized as the epicenter of poverty, unemployment, crime and violence, rather than a bastion of scholars, leaders, and tennis champions. That he devoted his entire adult life to channeling those gifts in service to others speaks volumes about the man and the profound loss that marks his passing.

Whether it was through his work as founder and president of the Elmhurst District Youth Tennis Program, his quarter century as a USTA volunteer, his ceiling-shatter- ing ascent to the presidency of the USTA NorCal, his tireless work with the City of Oakland or the many unsung acts of kindness and generosity he performed far removed from the spotlight and scrutiny of the tennis establishment, Manning was a one- man tour-de-force. His dogged determination to ensure that every child, regardless of circumstance, had an opportunity to participate in the sport he so dearly loved was only the tip of the iceberg of this complex, driven man. Injustice, in any form, was simply not to be tolerated, particularly where young people were concerned. Through his sheer will and using tennis as a vehicle, he was able to break barriers that others hadn't a clue how to address. Education and access were at the top of his priority list and he financed from his own modest, and well-worn pockets everything from clothing and housing to equipment and books, to tutors and specialists, so that the hundreds he embraced as his own would not be among the next claimed by East Oakland's unrelenting streets.

His charm, intelligence, quick wit and experience as a coach, official, first responder, entrepreneur and advocate could have taken him any- where, yet he chose to cement his legacy from the nest of his humble beginnings. He approached life with a fearlessness that allowed him to be a beacon of hope for those who most needed him and exuded a joy and effervescence that allowed him to walk into a room full of strangers and leave with a handful of lifelong admirers and friends.

But it is the kids from the neighborhoods along Oakland's Elmhurst corridor, now becoming the most impressive of young men and women, for whom Manning lived and breathed. Isaiah Cox, Dale Evans (USPTA Rookie of the Year and associate pro at Claremont Resort and Spa), Bethlehem Workeneh (recent Southern University graduate and top junior player), Ariel Ellis and Brook Workeneh (both nationally ranked standouts) are testament to the impact Manning continues to have. Their lives and those of untold others will be forever shaped by his audacity to dream a little bigger, to try a little harder and to give a little more in a quest to serve others.